Contest Of The Springfield Compacts: XD(M) vs XD-S

There are a number of great CCW guns made by Springfield Armory; two that people end up weighing against each other are the XD(M) vs. XD-S. These are two of the most popular compacts in Springfield’s lineup and either would be solid choice of carry gun.

You’d be well-served with either one of these guns in your concealed carry holster, no doubt about it…but there are some differences that might add up to one being better for you than the other. It’s not exactly the difference between chalk and cheese, but it’s enough to tilt the table to one or the other depending on what you, the individual person doing some gun shopping, are looking for.

What are those differences between the XDS vs XDM? Let’s find out!

The XD(M): A Match-Grade CCW

The XD(M) is the premier edition of the XD platform, with a number of improvements over the base XD and Mod2 product lines. Ostensibly the “M” is for “match-grade” as one of the features is a match-grade barrel.

Other improvements include a revised take-down mechanism, which doesn’t require pulling the trigger (which releases the sear and uncocks the firing pin on guns that do), which some people appreciate as a gun safety feature. There is also revised texturing on the slide and frame compared to the XD and Mod 2. The XDM also has changeable back straps.

You also get a standard red fiber-optic front sight with a twin white-dot ramp rear sight.

As to the fun bits, the XD(M) compact has a 3.8-inch barrel. You can choose the compact model, with a shortened grip, or the full-size 3.8-inch model. Most people will elect to choose the compact. This model has an overall length of 6.75 inches, standing 4.75 inches tall and 1.18 inches wide, nice and compact. Weight is 28 ounces with an unloaded compact length magazine.

So, compact size, good features and relatively high capacity. For this, Springfield Armory asks $631 MSRP for the base model compact in 9mm. You can opt for a stainless slide for an extra $64.

The XD-S is one of Springfield’s most popular carry guns and for good reason. It’s a solid single-stack subcompact striker gun, and it is a breeze to carry every day.

Just as the S&W Shield is the model flying off shelves for Smith and Wesson, the XD-S is for Springfield.

Capacity is 7+1, 6+1 or 5+1 – depending on chambering – with a flush-fit magazine, though you can add one round to each with an extended magazine.

However, the XD-S has a lot in common with the XD(M), in that it has some premium features. Fiber optic front sights are standard, and it likewise comes with changeable backstraps. Switch to the one you like for easier shooting.

Unfortunately, though, you will have to pull the trigger to take it down. With that said, fewer bullets in the magazine also results in fewer dollars needing to be plunked down, as the XD-S starts at $499 for the base model in 9mm.

The Springfield XDS has undergone some changes over its life cycle so far, and is now offered as the XDS Mod2, with the original XDS having been discontinued. In fact, the pistol has been changed from a compact polymer striker pistol to a 1911 and has thus been changed into a gun that’s actually good.

HA! Just kidding. The XDS is a solid CCW pistol. And actually, Springfield’s 1911s are excellent while we’re at it.

The XDS Mod2 ditches the knurled grip textures in favor of the XD Mod 2’s stipling pattern. Springfield Armory has also ditched the “Grip Zone” lettering, which a lot of people found terribly corny. Swappable backstrap panels are included, and the slide has been beveled, shaving off about 1.5 oz.

The standard sight configuration – back steel combat ramp rear, fiber optic front – remains the same, as does capacity and chambering.

Choosing Between XDM vs. XDS

How do you choose? In reality, the difference between XD(M) vs. XDS pistols is actually not huge. The difference is about a half-inch in length and about a quarter inch in width and height, and about 5 ounces in weight. No one is going to have any problems carrying or concealing either gun.

For the purposes of this comparison, let us consider the XDM compact, as it is closest in dimension and purpose to the XDs.

However, there are a couple of different features that are likely to tilt a person in one direction or another.

The XDM has a slightly better trigger. Is it custom 1911 good? No. In fact, it’s not even Walther PPQ good. (Look, Walther has the best striker trigger.) However, the XDM’s is a little better than the rest of the XD lineup, because it gets a bit more attention to detail.

Both are good shooters. Both carry sufficient ammunition for defensive applications, though the XD(M) obviously holds more. For the person that wants or demands higher capacity (no one ever wishes they’d brought fewer bullets) from their carry gun, the XD(M) is the pick. Since it can also be used with full-size magazines (though a grip sleeve is a good idea) you can carry 19 rounds in your spare. In terms of round count, the XDM vs XDs fight is won in a walk.

The XDS, though, does come with more factory options in terms of finishes and sights.

Some people insist on comfort in carrying and that’s where the XDS might hold a bit of an edge. It’s not monumentally smaller than the XD(M); it’s not like the XDS vs. XD(M) dimensions are the difference between a VW Beetle and the USS Enterprise. (Any of them, real or imaginary.) It’s barely smaller, in any dimension, but a little bit of real estate saved inside the waistband can actually make a difference.

Some people want the smallest carry gun possible for ease of carrying. While the XDM compact is hardly a difficult gun to carry, the XD-S is easier. To the right person, that will matter, and for that sort the XD-S is the gun to get.

If you were to ask me which I would get between these two, I’d lean toward the XDS…but not for the reasons you’d think. On the one hand, I gravitate more toward double-stack guns and XDM compact pistols can be used with a full-size magazine if desired. With the flush-fit magazine, the XDM Compact is not impractical to carry. However, the XDS is eminently more totable as an EDC pistol, not terribly difficult to shoot, cheaper and you aren’t undergunned with a single stack in 9mm.

The problem for me is the XDM that I actually DO want is the big one in 10mm. So I’m probably the wrong guy to weigh in on this one.

Aside from those two attributes, there isn’t too much to set apart one or the other between the XDM vs. XDS. Besides a (arguably) better barrel and some cosmetic differences, a lot of the features are exactly the same. The XDS does require a trigger pull to take down, but anyone getting into the plastic fantastics had better be prepared to do that.

And try them both out! You’ll probably get a feel for which one you like better, and which shoots better for you. A gun you don’t shoot well is one you won’t carry, after all.

When you head to the range to try these firearms out for yourself, use one of our free printable shooting targets! 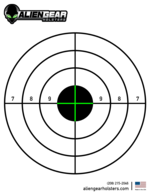