How the holster attaches to you does matter.

Most holsters attach to the belt and/or the waistband. While there are many proprietary variations on the design, they almost all fall into a few categories.

Fold-over clips are a piece of material (typically spring steel or molded polymer) that go over the waistband and/or the belt. They can be narrow or wide, and a holster can come with one or two in most cases.

Belt loops are another common attachment type, which you pass the belt through. Typically they’re considered slightly more secure than clips, but also typically take longer to put on or take off since the belt must be passed through.

Snap loops – also called “pull the dot loops” – are a bit of a middle ground between the two.

It’s a closed loop, but can be opened and closed for ease of use. 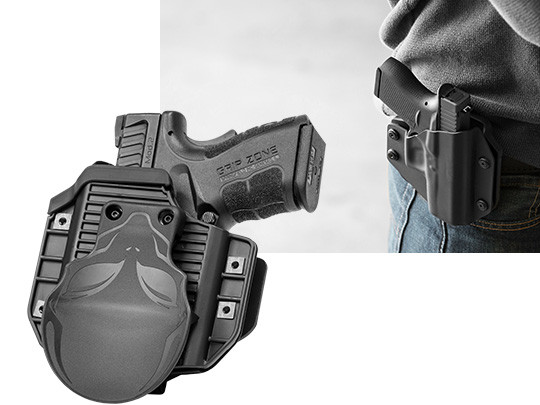 They make putting the holster on and taking it off faster, but tend to be a little less stable than other attachments.

Ankle holsters attach to the ankle/lower leg with straps. Some are a simple strap or wrap, and others have more of a garter-style design. A select few are closer to an ankle wrap, cupping the heel as well as the lower leg above the ankle, which is the most stable to wear.

Shoulder holsters drape a harness over the shoulders. Some have an articulating center harness, some don’t. You want to have adjustable straps or get a shoulder holster tailored for the proper fit.

Some shoulder holsters have belt hooks, which help to anchor the holster in place somewhat. This keeps the gun from flapping when you walk, so it’s a good feature to have.

Drop leg holsters have thigh straps – which attach to the leg itself – and a belt loop, which attaches to a belt. Many have a single belt loop, but it’s better to have two with articulating buckles. That way, the holster moves with you and will be more comfortable.