Looking to acquire a Smith and Wesson 9mm? That’s a great instinct; S&W has been making quality 9mm pistols for more than half a century.

S&W makes some of the best 9mm pistols for concealed carry, for law enforcement duty use, home defense, and for general plinking/range use as well.

What are the Smith & Wesson 9mm pistols to get? These 7 S&W pistols are the best places to start… 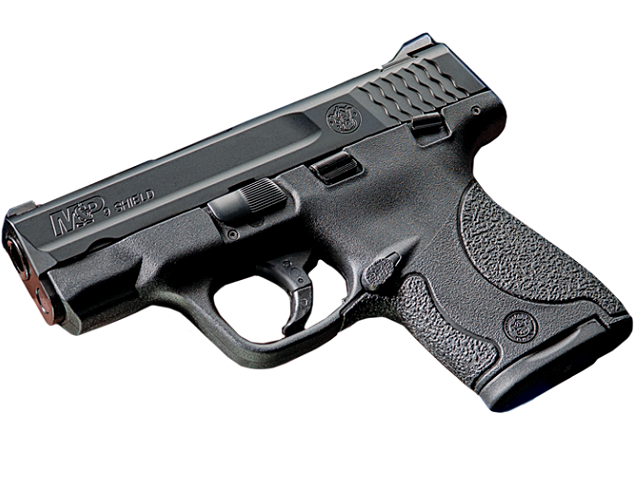 The S&W M&P Shield 9mm M2.0 takes everything that’s great about the Shield and adds a few improvements. While the M&P series as a whole is excellent, there are some known bits that could always be improved. A mushy or gritty trigger, for instance, is a common complaint.

Granted, a person complaining about how a sub-$500 pistol doesn’t have a custom shop quality trigger is asinine, but unfortunately you can’t compel people to be reasonable.

The M2.0 series is a facelift of the M&P series, having been applied to the full size and compact as well as the Shield. The revisions aren’t enormous; it’s still more or less the same gun, but a few bits have been changed to make the overall gun better.

The other major revision is to the trigger. The actual trigger is the same; it’s the same hinged trigger and passive safety system. However, the trigger stop was moved higher for less overtravel and a shorter reset, and a slightly better spring kit added.

The go-switch has long been a complaint about the M&P series. The new unit is decent – it’s not in the same class as the VP9 or VP40 among striker guns – but is certainly an improvement. Granted, this is a sub-$400 gun in most stores, so expecting a custom-shop trigger would be silly to begin with.

It’s the M&P Shield. You know that you’re getting one of the best carry pistols possible with the M&P Shield 9mm M2.0. You’ll run into both versions both new and used, but 2.0 is going to eventually be the only new one available as production of the original Shield winds down.

The S&W M&P9 is one of the best 9mm pistols available today, all things considered. It’s a polymer-framed, striker-fired full-size pistol much like the Glock 17. However, it has some features and refinements that similar guns sometimes lack.

The M&P9 has excellent ergonomics with a 1911A1-inspired grip angle for comfortable handling. Swappable palmswells allow you to tailor the grip. The base model has a passive trigger safety system. The base model has a 4.25-inch barrel, and holds 17+1 of 9mm. Three-dot sights are standard.

However, the beauty of the M&P9 is diversity of choice. You can opt for night sights. You can opt for a manual safety (1911-style; flip up to activate) or Performance Center models, extended barrel (5-in) models, threaded-barrel tactical models…more than a dozen variants exist.

The base model pistol is more comfortable than many other striker guns, and you get far more factory options as well. If you’re after a modern full-size gun, this is the Smith and Wesson 9mm to get.

The Model 39 was the original Goldilocks gun, as one of the first widely available double/single action semi-autos made by an American company. The Model 39, the original S&W 9mm pistol, actually still offers a lot today.

The aluminum alloy frame and slide housed a 4-inch barrel, with an anodized finish that resembles blued steel. Low-profile steel sights rode up top and wood panel grips went on the side of the grips, which housed an 8-round single stack magazine.

The operating system is incredibly logical, with a Walther-inspired decocking safety. By modern standards, it’s hefty at 28 ounces, which is a lot for the reduced capacity. However, it has a palmswell similar to the Browning Hi Power and an extended beavertail for a nice high grip, which made it easy to shoot.

It’s a classic pistol, and it works well as a duty gun or as a CCW. However, you need to pick the right one. Of the originals, look for the 39-2 models; these were revised to feed hollow points as well as for greater reliability. Second and third generation models – with three- and four-digit model numbers like the Model 3903 and 3913 – were made into the early 2000s, which will have less wear and tear and were known for being much more reliable.

If you love the M&P9 but find it too big for carry, the Smith and Wesson M&P9C is the ticket. This Smith and Wesson 9mm pistol has double-stack capacity – 12+1 in the original model and 15+1 in the M2.0 versions – but is compact and light enough for easy concealed carry.

It’s much like the M&P9 full size, but with a shorter barrel and slide and reduced grip. Changeable palmswells and numerous factory options are available too. The original version had a 3.5-inch barrel, but the M2.0 models have a 4-inch or 3.6-inch tube.

Similar to the Shield, the M&P9C is known for being reliable, accurate and as easy to shoot as it is to carry. There aren’t many pistols that promise the best of all possible worlds AND deliver, but this is definitely one of them. Modern CCW pistols don’t get much better.

Except when they do… 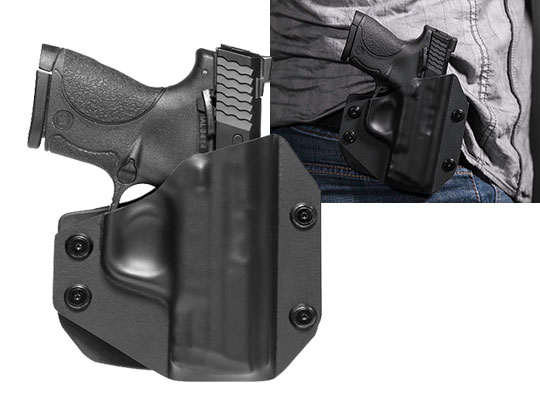 The original version has been updated in the 2.0 model, which is revised to a 4-inch barrel and carrying capacity of 15+1, along with a revised trigger, grip texturing and slide serrations. There is also an M&P9C M2.0 with a 3.6-inch barrel as well, should you prefer a shorter slide. Whereas the original fit between a Glock 19 and Glock 26 in dimensions and capacity, the M2.0 version is about the same size as a Glock 19. 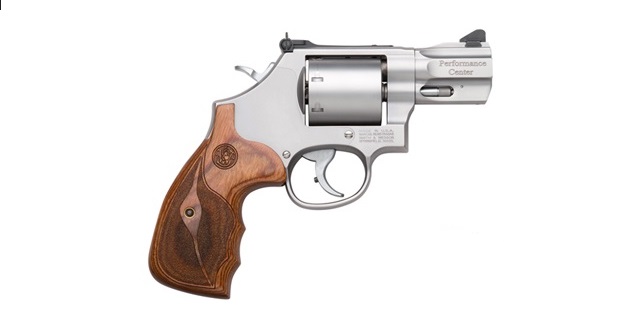 Of course, S&W is known for their revolvers and as it happens, they have a great one for packin’ – the Performance Center Model 986 2.5″ barrel model. It’s a K-frame revolver with a round butt frame (meaning the rear of the grip frame is rounded, for those who don’t speak wheel gun) so it’s a bit beefier than a J-frame snubby revolver but still plenty compact enough for concealed carry.

The Model 986 family is a revision of the Model 686, the stainless steel variant of the Model 586. The 986 PC model swaps the standard fluted 6-round cylinder for a straight cylinder holding 7 rounds, with the cylinder face machined to accept moon clips. This is actually more advantageous than .38 Special or .357 Magnum; moon clips actually ensure faster reloading and sure ejection.

Functional aspects along with the lower cost of ammo actually makes the 986 Performance Center a much more ideal CCW revolver.

The gun is a bit of a beefcake, as overall length is 7.5 inches, cylinder width is 1.4 inches and weight is 31.7 oz unloaded. It’s also not cheap, at $1,129 MSRP. So it’s expensive, and not small…but it’s also crafted by Smith and Wesson’s Performance Center, so you know you’re getting quality.

Simple, classy, effective and novel, which is definitely more than can be said for many plastic pistols. For the gun enthusiast who dares to be different, this is the gun to buy.

The Smith and Wesson M&P9 Shield EZ is one of the easiest pistols to deal with, and are also ridiculously easy to shoot very accurately.

The EZ series replaces the striker-fired system of the standard Shield with an internal hammer-fired single-action system. This reduces the amount of spring tension required to fire the pistol, and therefore the “stiffness” of the slide. For weaker or smaller hands, that makes it far easier to charge the gun. The loading assist tabs in the magazine also help in this regard, especially since loading Shield magazines is a ROYAL PAIN IN THE YOU KNOW WHERE.

The M&P9 Shield EZ is a little bigger than the standard Shield, with a 3.678-inch barrel and taller grip, so it does have larger dimensions, but it’s hardly difficult to conceal. However, with the easier operation, and very easy shooting characteristics…it’s one of the easiest guns to live with.

Except maybe for a 1911, and Smith and Wesson makes a doozy for CCW: the S&W Performance Center SW1911 Pro Series 9mm. This Smith and Wesson 9mm is S&W’s Officer frame in 9mm, though .45 caliber is available too.

A 3-inch bull barrel is installed in lieu of a bushing, with a full-length guide rod. Capacity is 8+1 and the grip is shortened to 5 inches with a rounded – not bobbed – mainspring housing for easier concealment. A skeletonized trigger and hammer are installed, along with a beavertail grip safety to make it more shootable. A black stainless slide sits atop a black scandium frame, bringing carry weight down to 26 ounces. It does use an external extractor, which some 1911 aficionados claim is heresy.

It’s a bit heavy, but overall dimensions are 7 inches long by 5 inches tall and 1.05 inches wide, with low-profile ambidextrous safety levers. Sights are low-profile combat 3-dots. It does have a Series 80 trigger system, but it’s tuned by the Performance Center to have minimal creep.

Granted, you’ll pay for the upgrades – MSRP is over $1300 – but the devil is in the details with any gun, and this gun’s details have been seen to by some of the best smiths in the business.