S&W CSX Vs. Shield Plus: Brother vs. Brother.

When the CSX was released, Smith & Wesson made it known that they had put another double-stack subcompact into their lineup by starting from scratch. With all their successes with their M&P series of compact pistols, the new CSX naturally begged for a comparison with the S&W Shield Plus. They are similar in size, capacity, weight and many other metrics, therefore, they are similar in function… but is one of them objectively better? If one were to be in the market for a new S&W compact pistol for concealed carry, is the M&P Shield Plus or the CSX better?

We set out to answer that very question and (SPOILER ALERT) the short answer is, it depends on what you like.

Smith And Wesson CSX: A Micro with a Touch Of Class 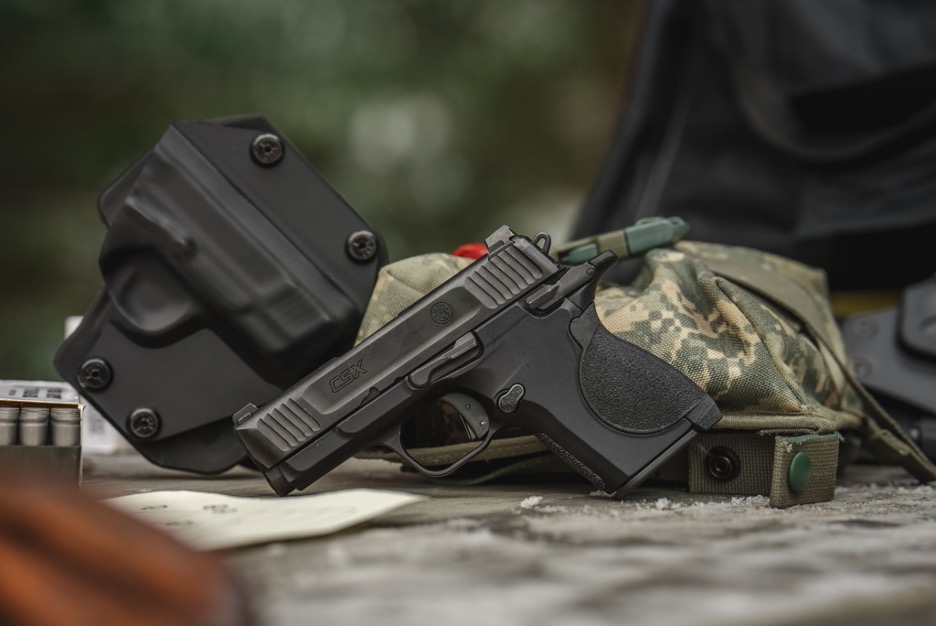 The Smith and Wesson CSX is a double-stack micro-compact 1911 chambered in 9mm, much like the Kimber Micro 9, Sig Sauer P938, or Springfield 911, but the magazine is a staggered design (double-stack) rather than a single-stack. This, in and of itself, is not new. The double-stack 1911 format has been around for quite some time. Various companies have been making firearms this way since the early 90s. The Staccato (STI) 2011 and Caspian are just two examples. Making a micro 1911 in a double-stack 9mm configuration was just a matter of time, and Smith and Wesson just happen to be the people who did it.

Let’s start with the numbers:


The CSX is single-action only, with a magazine that holds 10+1 of 9mm in the flush-fit magazine and 12+1 in the extended (both of which come with the gun if you buy one). The magazines in Smith and Wesson’s literature appear similar to those of the M&P9 Subcompact, but there’s no word on compatibility so they may be different.

The beavertail is longer than most other micro 1911s, which is an ergonomic improvement. Additionally, the frame was designed to use grip panels so you can customize the fit, if so desired.

The CSX lacks an accessory rail or optics cut with no word on availability for those features as of yet. You’ll still have the standard 3-dot iron sights most users are accustomed to, but if you’re looking for something more, you’ll need some help from outside sources.

Another improvement over other micro 1911s is that the manual safeties are extended and ambidextrous. Smith used a rather clever touch by moving the grip safety pin, (which the safety levers rotate on), further back, so they’re actually usable. Compared to an actual 1911, where the safety levers are barely usable, the CSX is definitely an improvement in that regard.

While a number of companies make micro 1911s, it seems like, with the CSX, Smith and Wesson is looking to define, rather than imitate. And of course, it’s made to be a concealed carry gun, so getting one should certainly be followed by getting a Smith & Wesson CSX holster.

What About the Shield Plus? 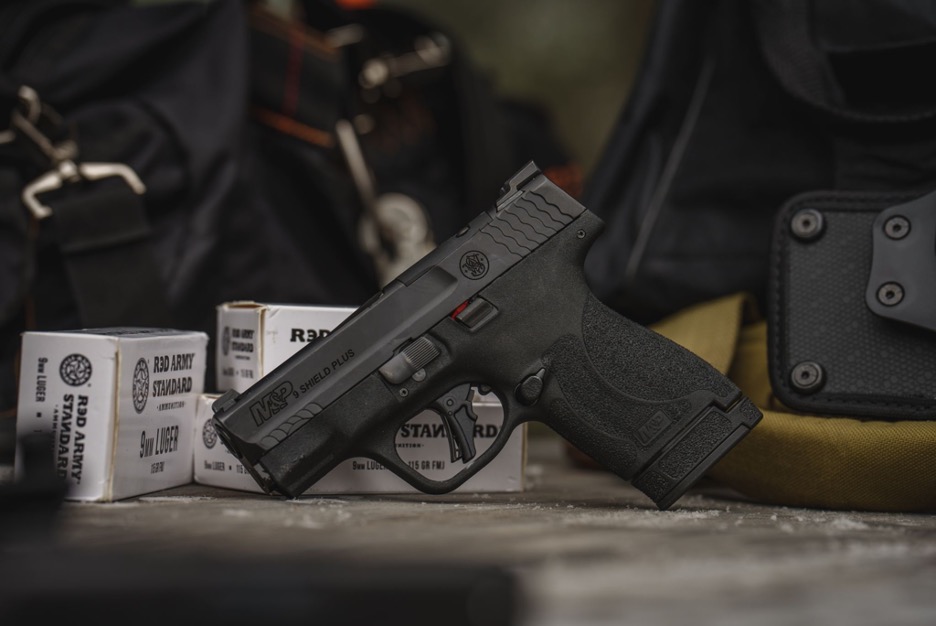 First, the tale of the tape and the Shield Plus specifications:


The Shield Plus is the M&P9 Shield M2.0 but with a slightly fatter grip and a partially staggered magazine. Like other double-stack micros, the CSX magazine tapers to a single column at the top, which is how the Shield Plus manages to remain almost the same width as the standard M&P Shield. The gun models are so similar, in fact, it’s fairly easy to find Shield Plus holsters quickly.

The Plus model brings the capacity to 10+1 of 9mm standard or 13+1 of 9mm with the extended magazine. The base model gun with white dot sights is $553, but you can add night sights and an optics-ready slide if you want. You can also get the gun with or without a thumb safety.

Aside from the magazine, Smith and Wesson gave the Shield Plus a flat-blade trigger with a tabbed safety, rather than the hinged trigger of the standard Shield. The Shield Plus has all the things that are good about the standard Shield, with a wider magazine and a new trigger. It’s lightweight, practically the same size (so it’s nice and compact), and easier to shoot than its small size would suggest.

It’s easy to see why Smith & Wesson chose the name of this gun. It is everything that’s great about the Shield, plusgreater ammunition capacity and a different (arguably better) trigger when compared to the standard model.

As we started down this path of testing these two firearms against each other, we quickly realized we were answering a question akin to “Is analog better than digital?”

CSX vs M&P Shield Plus 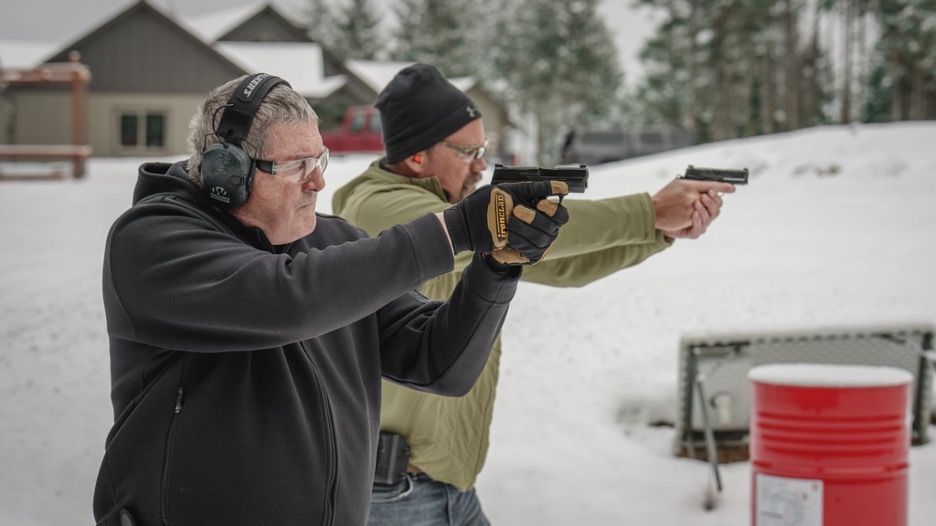 In terms of dimensions, weight and capacity, there’s only a marginal difference between the CSX and the Shield Plus. These guns are fairly well matched, despite the difference in the frame of the CSX. In terms of onboard equipment, there is no real advantage either. The base models of both guns have 3-dot metal sights and both have decent out-of-the-box triggers for guns of their size and price point.

Where the Shield Plus enjoys an advantage is in its factory options. You can order night sights, an optic-cut slide, and optional thumb safety. The Performance Center model brings an addition of a 4-inch barrel and other refinements allowing you to order a more tricked-out gun from the factory. We wouldn’t be surprised if this changes eventually, but for now, the CSX comes as is.

When it comes to aftermarket upgrades, the Shield Plus has the advantage of having been on the market longer and, therefore, has more aftermarket accessories available for it. The Shield Plus has options for aftermarket sights, aftermarket triggers like Apex, and other accouterments you can install, if you feel so inclined. Maybe those options matter to you, maybe they don’t. But again, that is almost certain to change with the fullness of time, so the Shield Plus may have an accessory advantage, but for how long?

The little niceties aside, there are few material differences between these two guns in the end. They hold, for all intents and purposes, the same number of bullets. They’re the same size, weight, and everything. There is nothing one does that the other doesn’t.  Design aside, one of the only tangible differences in functionality between them is the CSX is hammer-fired single action only, and thus designed to be carried in “Condition One.”

This means picking one is going to come down to personal preference and which one you find performs better for you. Have you been able to handle these guns? Have you shot both? Let us know in the comments!